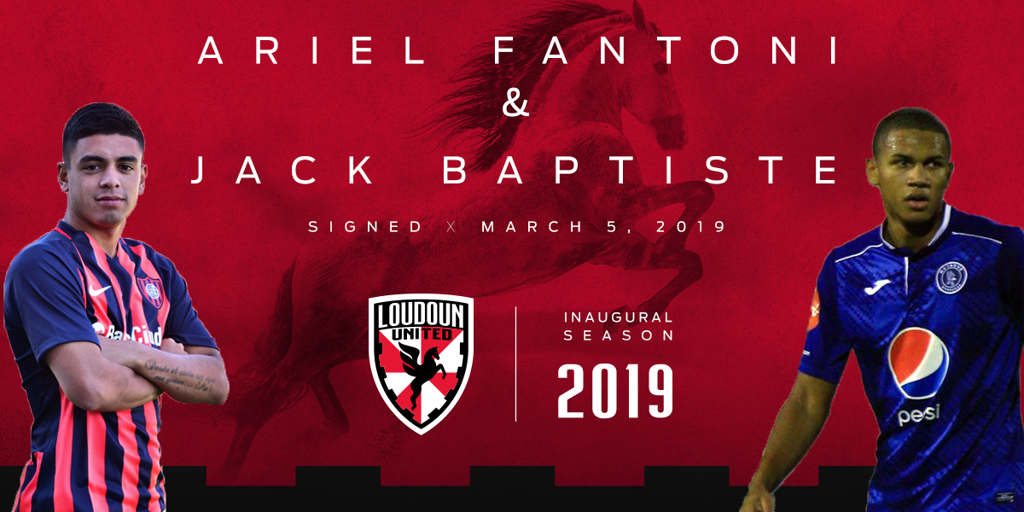 “Ariel and Jack will be vital to Loudoun United’s success in 2019,” Dane Murphy, Loudoun United FC Technical Director, said. “They are two young and hungry players who have a bright future in the sport. Jack was first scouted at the U-20 Concacaf Qualifiers in Bradenton, Fla., for his outstanding play with Honduras. Ariel has a great reputation in Argentina (San Lorenzo) and Central America as a midfield prospect and someone with real potential.”

“There will be variance in the way the both impact the game. Ariel is dynamic and attacking player with an ability to open up the field on the dribble and with his combination play. Jack is a physical presence that can control a game in the midfield. Our mindset is to consistently bring players into the club that have the ability to play the game the right way aesthetically and professionally. Jack and Ariel are both entirely capable of helping us achieve that standard of play.”

Baptiste is from San Pedro Sula, Honduras. He joins Loudoun United from F.C. Motague, a club located in Tegucigalpa, Honduras, that competes in the Honduran top division. The midfielder was promoted to the first team after playing on the Motague U-19 team in January 2018. Baptiste also participated in the Confederation of North, Central and Caribbean Association Football (CONCACAF) U 20 Championship with the team in November 2018.

Fantoni joins Loudoun United FC after coming through the San Lorenzo de Almagro academy in the top tier of Argentine soccer (Argentine Primera División). The 20-year-old from Morón, Buenos Aires did not feature for the first team but played in the Superliga Argentina de Fútbol; a league for academy players to compete with other youth teams in Argentina.