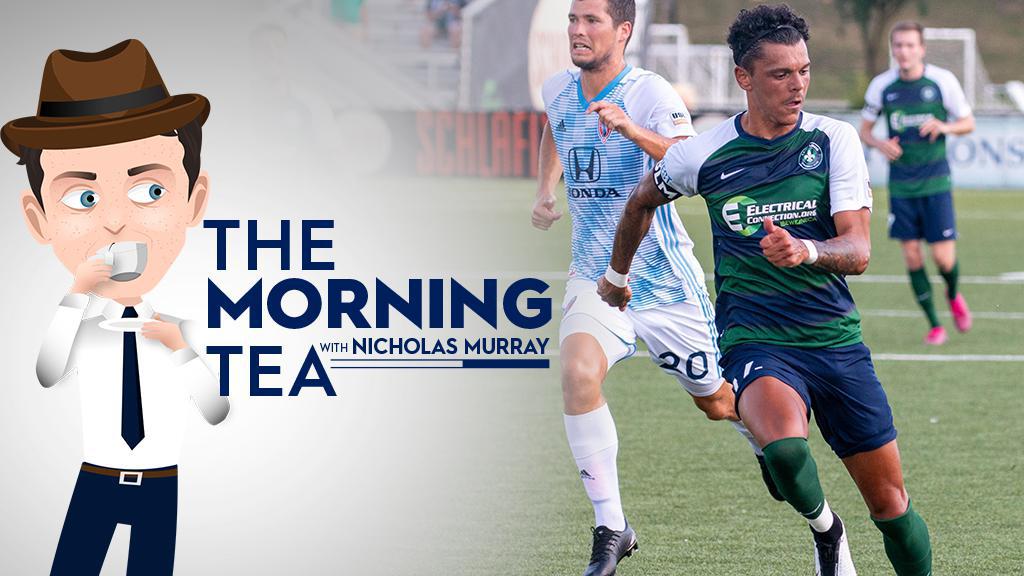 Saturday night could see the final game in club history for Saint Louis FC. Then again, that could have been true last Saturday, but then Tyler Blackwood and his teammates ensured they’d get at least one more game. Here’s your Morning Tea for Friday.

In the final weekend of July, as Saint Louis FC returned to play its first game at West Community Stadium after the resumption of the 2020 USL Championship season, a new banner appeared in The Corner, home of the St. Louligans.

Almost life-size, it featured a Simpsons-style cartoon of forward Tyler Blackwood, with the slogan “Eat My Short Shorts.”

The tribute came in part thanks to the celebration of Blackwood’s birthday, which had arrived two days prior to the club’s game against Indy Eleven. But it also brought to the fore the bond between the player who had arrived at the club less than a year prior after a transfer move from Sacramento Republic FC and had quickly endeared himself to his new club’s fans with his ability and his personality.

As Saint Louis goes into this weekend’s Eastern Conference Quarterfinals at least in part thanks to the goals Blackwood scored this season, the fans are going to be a major element the English forward is going to miss most as the club’s history comes to an end this fall.

“I’m thankful for this city and for my teammates,” Blackwood told the St. Louis Post-Dispatch’s Joe Lyons. “Last year, when we just missed the playoffs, I felt really bad for the fans because I know how supportive they are. This year, with the coronavirus, we’ve missed the fans, but they’re still supporting us in any way they can.

“Knowing the team won’t be around next year, it means that much for to us to finish as strong as possible.”

As a forward, Blackwood hasn’t been one of the league’s biggest scorers since he joined Phoenix Rising FC for the 2016 season, but he has been a reliable source for goals for numerous clubs over the past five seasons. His 35 tallies place him tied for 18th in regular season and postseason goals since the start of 2016 in the Championship.

He’s added six goals to his overall tally this season, and in those games, Saint Louis has gone 6-0-0. In the eight games Blackwood has appeared in otherwise, STLFC has gone winless. He bagged key game-winning goals in back-to-back games against Louisville City FC – the club’s first victory in Louisville all-time – and Indy Eleven – on his birthday weekend – and was on the scoresheet in crucial late-season victories against Sporting Kansas City II and Indy Eleven last Saturday night.

“Right now, I’m the most confident I’ve ever been,” he told Lyons. “The boys know the positions I have to be to score goals and they’re getting the ball in those spots. I’ve dealt with some minor injuries this season, but (STLFC athletic trainer) Jake Tanner is always there for us. I’m very thankful for him and everything he’s done for me and for the team.

“I feel like I’m going to score every time I walk onto the field.”

All of which is to say, should Blackwood find the net on Saturday night against Hartford Athletic at Dillon Stadium, the omens could be pretty good for STLFC, the St. Louligans and the rest of the club’s fans to see at least one more game in its history.

“As long as we win, we get another week with a bunch of guys we love and care about,” Blackwood told Lyons. “These guys are good people, not just great players. And I’m talking about everybody associated with this club.

“When the news about STLFC became official, instead of feeling sorry for ourselves, we decided that we wanted to go out with a bang.”

Bid now on a game-worn Justice Match jersey signed by former Afghanistan National Team captain Hailai Arghandiwal who will be playing in the Match. Proceeds will go to the Roots Justice Fund.https://t.co/M8BqrNoUcX…#KnowYourRoots pic.twitter.com/KveGl7Q14x

- You’ve hopefully been keeping up with the build-ups stories we’ve had on the official USL Championship Playoffs hub site, but The Athletic’s Jeff Rueter has a great guide to every team and a player to watch ahead of Saturday’s kickoff of the playoffs. Make sure to check it out before you make your selection’s in Pick ‘Em on the USL App.

- There’s plenty of experience in Birmingham Legion FC’s lineup, but youngster Jaden Servania has been impressive as the club’s first USL Academy signing this season. My colleague Cameron Koubek spoke with Servania as well as Legion FC’s Tommy Soehn and Jay Heaps about his progression in the professional ranks this season.

- Sacramento Republic FC has the second-longest postseason streak in the Championship, reaching the playoffs in each of its seven seasons in the league. Ahead of its clash with Phoenix Rising FC on Saturday night, the Sacramento Bee’s Cameron Salerno has five key things to know as the team looks to win its second title.

- It’s been a turbulent year in the City of Louisville, but as the club enters the postseason Louisville City FC is hoping it can make an impact and provide hope and excitement for the city’s residents. The Louisville Courier-Journal’s Jonathan Saxon spoke with LouCity captain Paolo DelPiccolo and Head Coach John Hackworth ahead of Saturday’s game against Pittsburgh Riverhounds SC.

- Veteran defender Peabo Doue announced his retirement from the professional game recently, having helped lead Loudoun United FC in its first two seasons to conclude a career that saw him make 128 regular season appearances and log more than 8,000 minutes in the Championship. Black and Red United’s Ryan Keefer spoke with Doue about his decision, his career, and what’s next.

- After logging more than 10,000 miles on the road during the regular season, New Mexico United gets its longest trip of an arduous season this weekend as it heads to face San Antonio FC in the Western Conference Quarterfinals. The Albuquerque Journal’s Ken Sickenger writes that while there have been serious downsides at times, being in the postseason matters more for the club’s players. “It’s a joy to be in the playoffs,” said goalkeeper Cody Mizell. “It doesn’t matter who or where we play now, we’re excited.”

- There’s been a history of top American players at Rangers FC through the years, including U.S. Men’s National Team players Claudio Reyna, Carlos Bocanegra, DaMarcus Beasley and Maurice Edu suiting up for the club. New Rangers signing Aaron Cervantes, previously of Orange County SC, is excited to be joining such illustrious company in the club’s history. “Yeah, big, big names, especially Americans that are on Rangers,” Cervantes told SB Nation’s Alicia Rodriguez. “I think Rangers is a big club, it’s one of the bigger clubs in Europe and they’re really successful and it’s an honor to play for them.”

- Pittsburgh Riverhounds SC Head Coach Bob Lilley believes the key to his side finding victory against Louisville City FC is going to be finding the right balance between pressing their hosts and possessing the ball to manage the game. “I think picking our spots of when to possess the ball to manage the game will be important,” Lilley told the Pittsburgh Tribune-Review’s Greg Macafee. “But we are also going to have to stay aggressive. … I don’t think it’s a game where you can sit and let Louisville play in the attacking half the entire game and just defend and hope to steal a goal. We have to be aggressive.”

- Reno 1868 FC will have 250 season-ticket holders at Greater Nevada Field on Saturday night as the club opens the playoffs against the LA Galaxy II. The Reno Gazette Journal’s Jim Krajewski writes that’s a smaller number than the club was hoping for, but it does at least offer some support as 1868 FC looks to claim its first home playoff victory in its history.