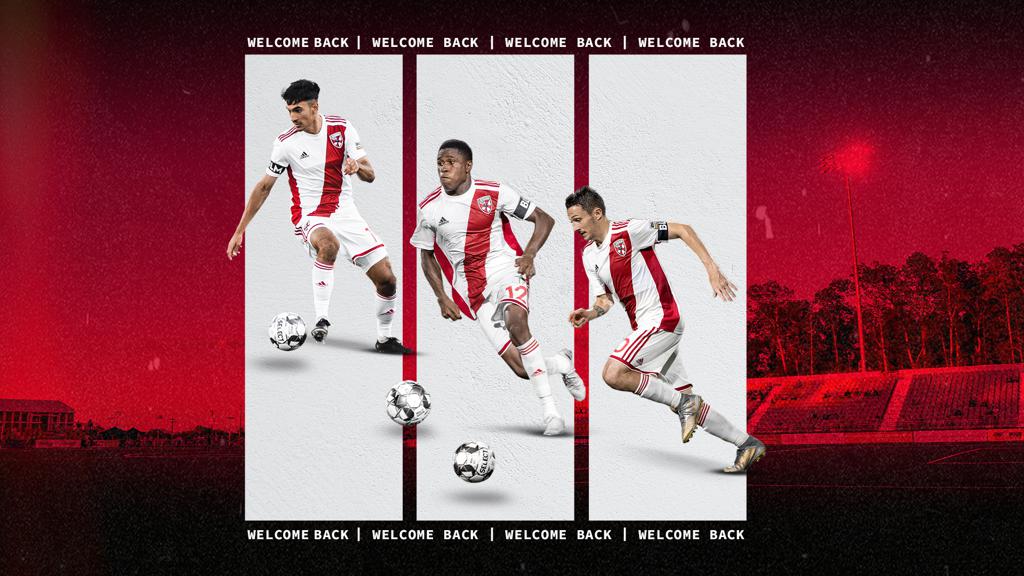 Loudoun County, Va (January 19, 2021)- Loudoun United FC announced today that they have re-signed midfielder Massimo Ferrin and forward Michael Gamble, and have acquired midfielder Kairou Amoustapha on loan from MFK Vyskov ahead of the 2021 USL Championship season. These signings are pending league and federation approval.

“We are excited to welcome back three players who had integral roles on our roster in 2020,” said, Ryan Martin, Head Coach of Loudoun United. “Massimo’s quality was constantly on show and we’re looking forward to him building on a promising first season with Loudoun United. Kairou was a bright spot for us last year, as he injected our team with pace, athleticism, and attacking quality. We believe he has a high ceiling for success in 2021 and are thrilled to have him back. Mike is a veteran on our team and our young players have thrived under his leadership. He has an edge going forward, so he’s another player we are really excited to welcome back in 2021.”

Ferrin joined Loudoun United on Feb. 20, 2020 after excelling in his two years at Syracuse University, scoring 12 goals in 38 appearances from midfield for the Orange. In his first professional season, Ferrin made six appearances (three starts); totalling 271 minutes.

Amoustapha signed with Loudoun United from ASN Nigelec in Niger on Feb. 20, 2020. The 20-year-old burst onto the scene in his first season in USL, scoring three goals and recording an assist in nine appearances. Amoustapha scored the equalizer against Philadelphia Union II in the 1-1 draw on Sept. 12.

Gamble re-signs with Loudoun United after providing his veteran experience in the 2020 season. The 27-year-old recorded one assist in 12 appearances for Loudoun last year. Prior to signing with Loudoun United on Jan. 30, 2020, Gamble was with Deportes Santa Cruz in Chile. He also had stints with USL sides the Rochester Rhinos and FC Tulsa, where he scored three goals and recorded three assists in 30 appearances.

Further roster news from Loudoun United in advance of the 2021 USL Championship season will be announced at a later date.