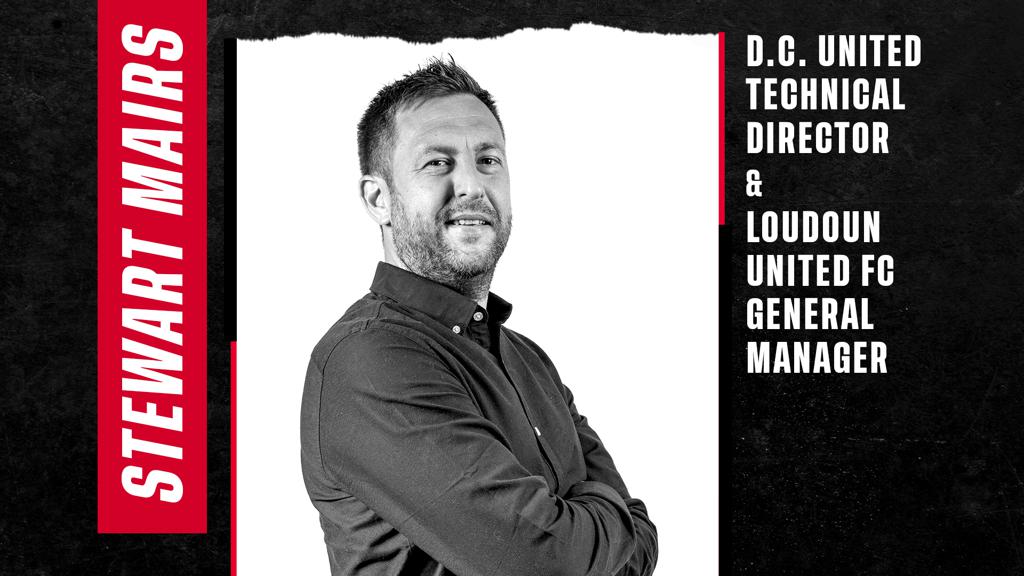 WASHINGTON, D.C., (April 26, 2021) –D.C. United and Loudoun United FC have announced Stewart Mairs will become the first General Manager for Loudoun United FC. Mairs, who originally joined D.C. United as the Director of Soccer Strategy and Analysis in 2016, had recently been promoted to Technical Director for the club in 2019, a role he will retain in addition to his new position.

“Stewart has been integral in building Loudoun United and played an active role in the establishment and execution of our Pathway-to-Pro model, which has seen several players progress from our Academy to our USL side to our first team,” said Jason Levien, CEO and Co-Chairman of D.C. United. “He possesses a unique ability to identify talent and work alongside his colleagues in the technical team to nurture and develop players for the next step in their career. We are confident in his abilities and leadership and are proud to elevate him to become the first General Manager of Loudoun United, as he continues his career growth.”

In Mairs’ new role, he will be responsible for constructing Loudoun United’s roster and working alongside Head Coach Ryan Martin to identify and develop players. Mairs will also work closely with D.C. United President of Soccer Operations and Sporting Director Dave Kasper and new D.C. United General Manager and Head of Technical Recruitment and Analysis, Lucy Rushton, to further establish Loudoun United as a pathway to develop young, talented Homegrowns for the first team.

“We have made some great strides in the last 18 months with regards to developing homegrown talent,” Stewart Mairs, Loudoun United General Manager, said. “I look forward to overseeing and fast-tracking more of our high-potential athletes through our academy system and Loudoun United to one day wear the black and red of D.C. United. There have been some fantastic stories already in the short period of Loudoun's existence and I am positive there will be many more to come.”

Before arriving at D.C. United, Mairs worked for Prozone, the performance analysis and statistics company based in the UK. He also worked as a consultant and as head of performance analysis for the U.S. Women’s National Team. During his time with the USWNT, he provided technical and tactical analysis of player and team strategy, helping the team to the 2015 World Cup championship as well as the gold medal at the 2012 London Olympics.

From 2004 to 2015, Mairs worked at Prozone Sports, and handled everything from providing performance analysis support for national soccer teams, to business development in the Middle East and managing more than 120 clients (including the U.S. Soccer Federation, Canadian Soccer Federation, MLS teams and various universities).

He holds an International Society of Performance Analysis of Sport (ISPAS) Level 6 certification, the second-highest degree available from the society, and graduated from the University of Hull with BSc Honors in Sports Science and Biology.

One of the founding clubs of Major League Soccer in 1996, D.C. United are among the most decorated teams in the United States with 13 domestic and international trophies.

D.C. United have called the District home for the past 25 seasons and play their home games at Audi Field in the Buzzard Point neighborhood of Southwest, Washington, D.C, which opened in 2018. In addition to D.C. United games, the 20,000-seat soccer-specific stadium hosts over 100 events year-round, including the District’s premier arts, culinary, and music festival, Unite the District Fest. Audi Field will soon be home to America’s number one sportsbook through a partnership with FanDuel Group.