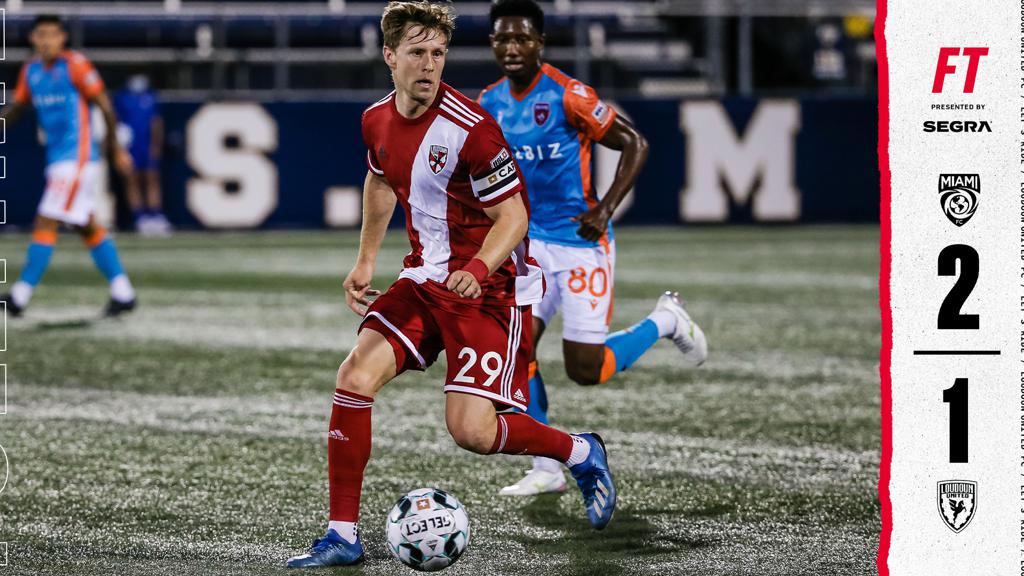 Loudoun United lost 2-1 to Miami FC in their first match of the 2021 USL Championship season at Florida International University Stadium in Miami, Florida. Loudoun United were unable to recover from two early goals scored by Miami despite taking 34 shots and playing most of the match a man up.

Head Coach Ryan Martin started with Jermaine Fordah in net and Wahab Ackwei, Timothy Mehl, Logan Panchot, and Gaoussou Samaké starting as the defensive back four. The midfield was composed of Noah Downs, Jeremy Garay, Kairou Amoustapha, and Massimo Ferrin with Samson Sergi and Jovanny Bolivar starting up top as the two strikers.

Miami FC started the first half with two quick goals. The first goal came in the fifth minute when Paco Craig finished a header off a cross that came in from Ariel Martinez. Their second goal came moments later when an unfortunate bounce led to Wahab Ackwei deflecting the ball into his own net. Loudoun reacted positively and dominated the rest of the half. In the 14thminute, Kairou Amoustapha was taken down from behind on a breakaway, leading to a red card and Loudoun United playing the rest of the match with a man up. The Red-and-White put pressure on and created chances for the remainder of the half. In the 33rdminute, Samson Sergi had an overhead kick attempt hit the post. Later in the half, Kairou Amoustapha had an attempt from inside the box parried away by the Miami goalkeeper. Despite the chances, Loudoun United went into halftime down 2-0.

Loudoun United kept the pressure on during the second half. Jovanny Bolivar and Kairou Amoustapha continued to make runs in behind and cause problems for the Miami FC defense. They were finally rewarded for their efforts in the 83rdminute when Amoustapha scored from the right side of the box, powering his shot over the Miami FC goalkeeper after receiving a perfect pass from Diego Gomez. Samson Sergi had a chance from in close to tie the game shortly after, but his attempt was saved by the goalkeeper. Despite their efforts, Loudoun United were unable to find the tying goal and lost the match 2-1.

Loudoun United FC’s next match will come on May 18 as they play their first home match of the season against New York Red Bulls II at Segra Field at 7:00 p.m. EST. The match can be streamed on ESPN+.