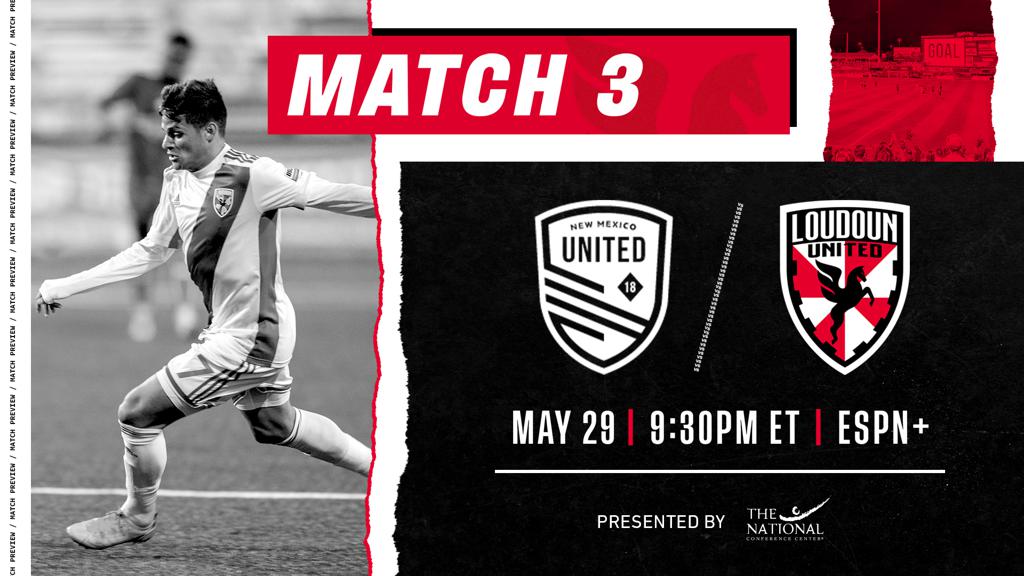 Loudoun United travel west to face New Mexico United in their third match of the United Soccer League (USL) Championship on Saturday, May 29. Kickoff is scheduled for 9:30 p.m. EST. The Red-and-White will look to rebound from back-to-back close losses in their first two matches of the season and earn three points against a tough New Mexico United squad on Saturday night.

In their last match, Loudoun lost 2-1 to New York Red Bulls II in their home opener at Segra Field on Tuesday, May 18. Loudoun United were unable to come back from New York’s second half penalty shot despite outshooting them 13-10 and keeping 63% of the possession throughout the match. New York Red Bulls II started the scoring in the 4th minute when Omar Sowe converted from in close off a cross. The Red-and-White responded well and took control of the rest of the first half. They were rewarded in the 27thminute when Sammy Sergi converted the rebound from right in front of goal after his initial shot hit the crossbar.  Gaoussou Samake’s run down the left wing and low cross into the box helped set Sergi up for the equalizer. The two teams went into halftime tied 1-1.

New York Red Bulls II regained the lead in the 64thminute when Mandela Egbo slotted home from the penalty spot following a foul by Loudoun goalkeeper Jermaine Fordah. Loudoun United pushed for the tying goal for the rest of the match. Second half substitute Darluiz Paz had a looping shot from inside the box saved by New York’s goalkeeper right before it crossed the line in the 79thminute. In the 88thminute, Massimo Ferrin’s free kick effort from just outside the box hit the crossbar after sailing just over the wall. Despite the pressure they put on, Loudoun were unable to find the tying goal and the match ended 2-1 in favor of New York Red Bulls II.

The match on Saturday night will be the first time Loudoun United and New Mexico United face off in the history of the clubs. New Mexico United played their first season as a club in 2019 and are a member of the Western Conference Mountain Division in the USL Championship.

The match will be broadcast on ESPN+ with coverage beginning at 9:30 p.m. EST.