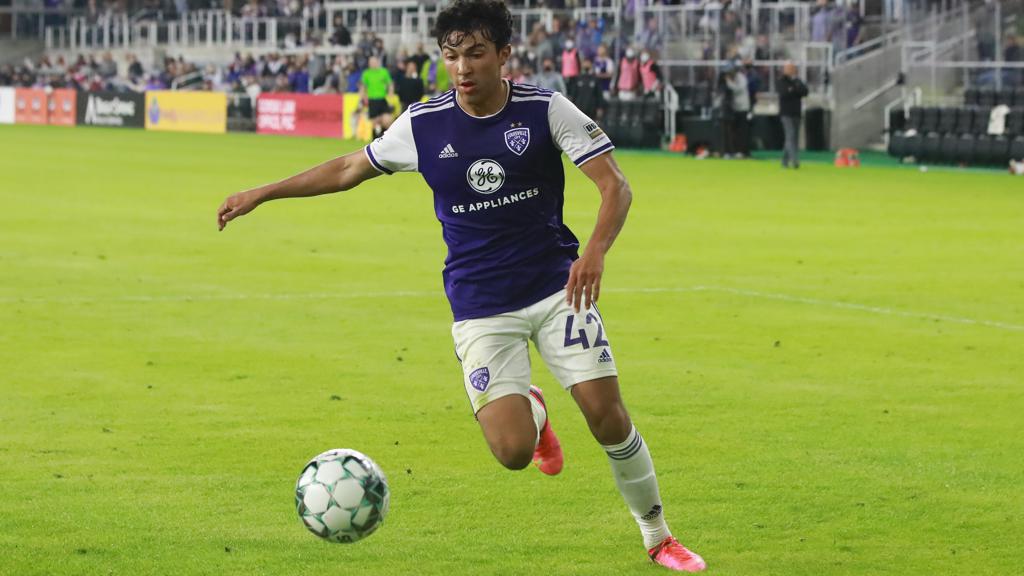 Louisville City FC 17-year-old Jonathan Gomez has been turning heads, and in May was called in to train with Mexico's Men's National Team ahead of the Concacaf Nations League this week. | Photo courtesy Em-Dash Photography / Louisville City FC

Welcome to a new monthly spotlight, where we’re going to be looking at some of the performers in the USL Championship aged 20 years old and younger from past month. We kick off with maybe one of the most highly-touted prospects in the league since the days when Tyler Adams and Alphonso Davies were gracing its fields five years ago.

There were high expectations for Louisville City FC 17-year-old Jonathan Gomez this preseason, but the young full back has easily exceeded them so far as his path to what looks like an incredibly bright future in both the professional game and at the international level came even further into focus.

You only need to look at the fact that Gomez spent this offseason training with top-flight clubs in Denmark and Portugal, and that he was called into the Mexico Men’s National Team training camp in Dallas last week as its top squad prepared for this week’s Concacaf Nations League in Denver, Colorado to get a yardstick on where his future may be headed.

In Louisville, though, Gomez has made a stellar start to his second season at the club. He claimed the Man of the Match award in the side’s 1-1 draw with Birmingham Legion FC on May 8, while across his first three appearances of the season he’s won the second-most duels (21) on the side at a 61.8 success rate, won 8 of 11 aerial duels and made a team-high 10 interceptions. For a 17-year-old – even one with as high a ceiling as Gomez has – those are remarkably impressive numbers.

It’s when he’s got the ball at his feet that some magic happens, though. Gomez has recorded three key passes so far this season while completing 109 passes overall at an 80.2 percent accuracy rate, but it’s the way he delivers the ball that has his current teammates gushing over his ability.

“[His left foot] is just like a wand,” said teammate Corben Bone recently. “He whips balls in and makes it super hard for the other team. It gives us a ton of chances going forward. I think he’s in a good moment now going forward and the future is bright for sure.”

As brightly as Gomez 2021 has gone so far, even more seem certain right around the corner.

Gomez may have drawn the headlines, but here are five more players who’ve caught our eye so far this season.

Ben Ofeimu, Birmingham Legion FC – After making the move to Legion FC this offseason having previously played in the Championship for the Philadelphia Union, Ben Ofeimu has stepped in confidently to the club’s back line this season. The 20-year-old has been part of three of Birmingham’s five shutouts this season, has completed 186 passes at an 83 percent accuracy rate and leads the team with 22 clearances and six blocked shots.

Michee Ngalina, Colorado Springs Switchbacks FC – One of the exciting players brought in by new Head Coach Brendan Burke this offseason, Michee Ngalina gave us a glimpse of what he’s capable of in a one goal, two assist performance against Sporting Kansas City II. As the Switchbacks’ schedule ramps up this month, we’re expecting a lot more excitement from the Congolese forward.

Jorge Hernandez, LA Galaxy II – Los Dos are firmly back in the playoff picture for a third consecutive season and the play of 20-year-old Jorge Hernandez is the main reason why. The attacking midfielder has four goals, two assists and 12 key passes this season to lead the way for Head Coach Junior Gonzalez’s side.

Alex Rando, Las Vegas Lights FC – A former University of Virginia standout, Alex Rando got thrown into the fire for Vegas against Phoenix Rising FC and emerged with a Championship-record 15 save performance. While the results haven’t gone Lights FC’s way yet, Rando is maintaining a 75 percent save percentage and is tied for the league-lead with 22 saves in only three games.

Jeremy Garay, Loudoun United FC – Garay might have been an unsung performer for Loudoun so far with Jovanny Bolivar and Kairou Amoustapha also looking bright, but the 18-year-old has 12 chances created and has completed 225 passes at an 88.6 accuracy rate in midfield while winning duels at a 64.5 success rate so far.