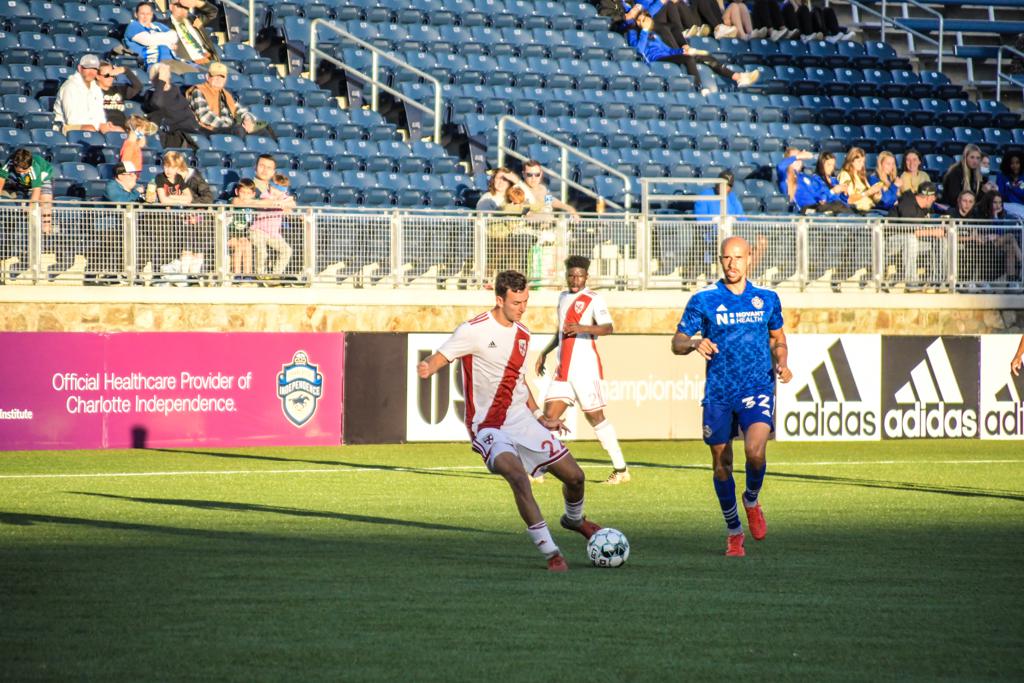 Loudoun United lost 1-0 to the Charlotte Independence in their 31st match of the 2021 United Soccer League (USL) Championship regular season. Loudoun United came up just short in a hard-fought match on the road despite controlling most of the match and keeping 58% of the overall possession.

Loudoun United started with Jonathan Mennell in net and Timmy Mehl, Nicky Downs, Robert Dambrot, and Jacob Greene in defense.  Landry Houssou, Gaoussou Samaké, Ted Ku-DiPietro, Jeremy Garay, and Michael Gamble started as the five in midfield with Jovanny Bolívar starting up top as the lone striker for the Red-and-White.

Michael Gamble and Ted Ku-DiPietro both had good opportunities to score early in the match. Gamble found space on the edge of the box but had his well-hit shot saved by the goalkeeper. The next sequence, Ku-DiPietro had a chance from the center of the box, but he pulled his shot just wide of the left post. Enzo Martinez scored the lone goal of the match in the 38th minute when he found the bottom left corner after a perfect pass was played in from the right wing by Gabriel Obertan.

Loudoun started the second half on the front foot as well and nearly found the equalizer in the 46th minute through Houssou Landry, but his shot from in-close was saved. Second-half substitutes Jackson Hopkins and Darluis Paz provided a spark and helped Loudoun keep the pressure on the Independence for the closing stages of the match. Despite keeping 63% of the possession in the second half, the Red-and-White were unable to find the tying goal and the match finished 1-0 in favor of the Charlotte Independence.

Loudoun will play against New York Red Bulls II for their final match of the season on Saturday, October 30. The match can be streamed on ESPN+ with coverage starting at 1 p.m. ET.