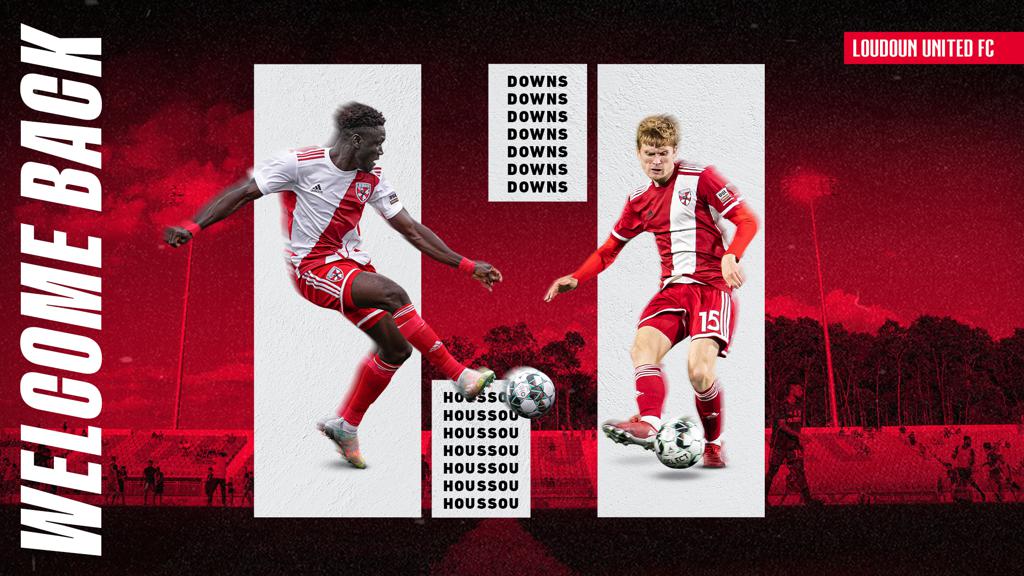 LEESBURG, Va. – Loudoun United FC have announced the return of two players for the 2022 USL Championship season. Midfielders Nanan Houssou and Nicky Downs have re-signed with the club ahead of the 2022 season with the Red-and-White.

Houssou joined Loudoun United FC on February 19, 2021, on loan from Ivorian club ASI D’Abengourou. The 21-year-old midfielder made his USL Championship debut on May 18, 2021, after coming on as a substitute in the match against New York Red Bulls II. In his first season with the Red-and-White, Houssou made 22 appearances (11 starts) and logged 1,079 minutes. During that time, Houssou maintained a passing accuracy of 83.4%.

The Ivory Coast native started his professional career with the Ivorian club ASI D’Abengourou in 2019. In his time with ASI, Houssou scored seven goals and recorded 16 assists in 20 appearances. The midfielder also represented the U-20 Ivory Coast National Team in 2019.

Downs joined Loudoun United FC on April 2, 2021 from USL Championship side Hartford Athletic. The midfielder made his debut with LUFC on May 3, 2021 and scored his first professional goal on July 24, 2021 in the team’s 3-1 loss to the Tampa Bay Rowdies. In his first year with the team, Downs made 30 appearances (22 starts), scored one goal, recorded one assist, and logged 1,879 minutes. The 26-year-old finished the season with Loudoun United’s highest passing accuracy with 92.6% in 30 games.

Prior to joining LUFC, Downs had a two-year stint (2019-2020) with Hartford Athletic, a USL Championship team. In his time with Hartford, Downs made 37 appearances across all competitions. The midfielder from Lakeville, Connecticut, also attended Yale University from 2015-2018, where he scored nine goals and recorded 15 assists in 65 appearances.

“We are excited to re-sign two integral players from our 2021 season in Houssou and Downs,” Ryan Martin, Loudoun United Head Coach, said. “They both played a lot of minutes in 2021 and have built a strong connection in the midfield together. They read the game at a high level and have been instrumental in establishing a culture at our club since arriving. We’re looking forward to them continuing to improve their relationship in the midfield and making an impact on our team in 2022.”